The Magic Touch Of Buck Ram 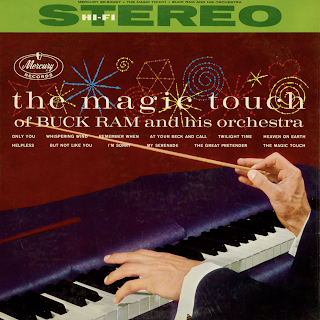 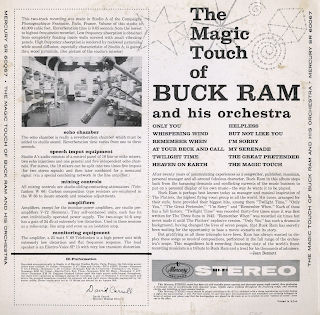 From the back cover: Buck Ram is perhaps best know today as manager and musical inspiration of The Platters, the highest flying vocal group in all the world. His tunes, arranged for their style, have provided their biggest hits, among them "Twilight Time," "Only You," "The Great Pretender," "I'm Sorry" and "Remember When." Each of these has a full history. "Twilight Time" was recorded thirty-five times since it was first written for The Three Suns in 1942. "Remember When" was recorded six times but never made it until The Platters' explosive version. "Only You" has such a dramatic background, having changed the lives of seven people, that Buck Ram has secretly been waiting for the opportunity to base a movie scenario on its story.

Only You
Whispering Wind
At Your Beck And Call
Twilight Time
Heaven On Earth
Helpless
But Not Like You
I'm Sorry
My Serenade
The Great Pretender
The Magic Touch
Posted by By Mark Betcher at 2:57 PM