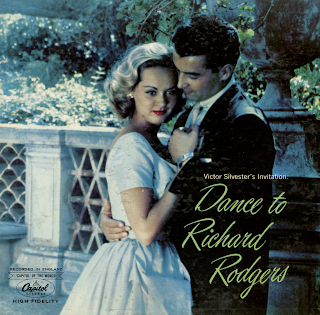 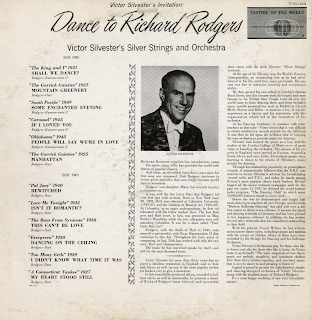 From the back cover: Victor Silvester from more than thirty years has enjoyed a fabulous reputation in England – and in Asia and Africa as well – as one of the most popular orchestra leaders ever to give a downbeat.

In this beautifully-produced album, recorded in brilliant stereo as well as monaurally, he presents a dozen of Richard Rodgers' most beloved, and successful show tunes with the sleek Silvester "Silver Strings" featured.

At the age of 22, Silvester won the World's Dancing Championship, an outstanding feat as he had never danced in his life until four years previously. His success was due to intensive training and exceptional ability.

He then opened his own school in London's famous Bond Street, and this became both the largest and most famous in the British Isles. People from all over the world came to learn dancing there, and these included many notable personalities, such as Madeleine Carroll, Merie Oberon and Belita – to mention a few. It was his experience as a dancer and his association with this organization which led to the formation of his orchestra.

At his Dancing Academy – in common with other teachers at that time – Victor found that it was difficult to obtain satisfactory records suitable for the ballroom. It was then he hit upon the brilliant idea of forming his own orchestra to provide music for dancing.

Silvester had learned the piano as a boy, and his studies at the London College of Music were of great value in founding the orchestra. The success of his records in England soon spread to Europe, Australia, South Africa and even India. Everywhere people were learning to dance to the strains of Silvester's music strictly for dancing.

Through his outstanding popularity on gramophone records, it automatically followed that the B.B.C. was anxious to secure Silvester's services for broadcasting (sound radio and T.V.), and today he stands among Britain's most popular dance band leaders. He has topped all the major national newspaper polls for the past ten years. In 1941 he devised his world-famous radio program, "The Dancing Club," to which some 10,000,000 listeners tune in every week.

Before the ware he demonstrated and taught ballroom dancing to teachers all over Europe, and his book, "Modern Ballroom Dancing" has sold well over a million copies in thirty-seven editions. It became the standard dancing textbook in Germany and has been printed in five Japanese editions! In addition, he has written several other textbooks that are considered outstanding in their field.

With his pianist, Ernest Wilson, he has written about ninety dance tunes, including tangos and sambas, with the accent on rhythm. Many of have been recorded by his Stings for Dancing and his Ballroom Orchestra.

Shall We Dance
Mountain Greenery
Some Enchanted Evening
If I Loved You
People Will Say We're In Love
Manhattan
Bewitched
Isn't It Romantic
This Can't Be Love
Dancing On The Ceiling
I Didn't Know What Time It Was
My Heart Stood Still
Posted by By Mark Betcher at 7:21 AM