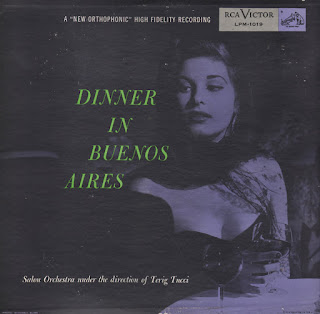 The fabulous cover model is waiting for a fancy hotel restaurant waiter to place a nice meat pie in front of her. A recipe for Empanadas (Meat Pie) along with Jogote (Ground Meat) is supplied on the back cover along with this about Terig Tucci:

Terig Tucci, who conducts the salon orchestra in these selections is a native of Buenos Aires whose talents as a composer, arranger and conductor have gained him distinction both in Argentina and in the United States. In recent years, he has been musical director of Latin-Amercian programs for International General Electric and a musical commentator for the World Broadcasting Co. He has spent many years as conductor and musical director on the staffs of both the National Broadcasting Company and the Columbia Broadcasting System. Three of his compositions are included in this collection – Senda Pampeana, Estilo Crillo and Serenata Incaica. The latter was used as a theme in the film, Kon-Tiki – Notes by John S. Wilson