Machito With Flute To Boot 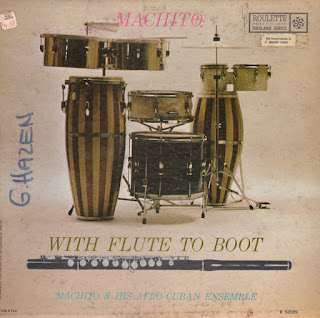 Available from the usual online vendors, so I will not be posting a sample.

An outstanding set in so many ways. Top shelf "tiki/exotica/jazz" period release.

From the back cover: Machito has for years been one of the leading exponents of Afro-Cuban jazz. His experimentations and excursions into this realm have been highly successful and in this collection he once again shows the extent of his understanding and experiences in this complicated but adventurous music.

In a previous Afro-Cuban album, "Kenya," Machete's main interest was in presenting the various percussion instruments such as bongos, timbales, guiros, congas and maracas. In this set, the concentration is more on presenting the featured soloists in relationship to the full sound of the Machito orchestra. It also places heavy emphasis on authenticity of rhythm whereas the Kenya album was keyed to a greater reliance on melody.

All material in this album was written and arranged by the featured flutist, Herbie Mann. It should be noted here that Herbie Mann has written and arranged for countless small ensembles; this however, marks his first effort with a big band. His effort is an excellent one! Not only in his talented performance on flute always prevalent, but throughout, his keen awareness of authenticity marks the album as a unique jazz accomplishment. Along with his regular flute used on such numbers as "Ring A Levio" and "Carabunta," he uses the alto flute on "Bacao," a lovely slow Afro-rhythm melody, the E-flat flute on "Brazilian Soft Shoe," which features Johnny Griffin on tenor and Curtis Fuller on trombone with a quick samba rhythm and a very different African flute which can be heard on "The African Flute" which features a 'Bata' rhythm in 6/8 time, and "Love Chain" which carries a 'baba' rhythm and features the use of a chorus of voices.

We have mentioned the various rhythms used because this too is a pronounced part of this collection. There is the calypso rhythm in "Calypso John," the rumba beat in "To Birdland And Hurry," the mambo drive in "Answer Me" and the cha cha sound in Machito covers such countries as Brazil, Jamaica, Haiti and Africa. There is even a touch of the middle-east countries in "Afro-Jazziac".

Two very out of the way numbers should be noted: "Afternoon Death" is a very morbid, mournful piece which features Johnny Griffin and Curtis Fuller, as well as Herbie Mann. This number represents ancient African sacrificial ceremonies when the sacrifice meant just that – afternoon death." "Carabunta" is another number filled with authentic, legendary meaning. The rhythm called 'santo lukumie' is used in religious ceremonies in Africa.

The extraordinary is the key to the album. It is the type of original, inventive and experimental work that creates and fosters ideas that push the boundaries of jazz beyond the four walls of a dimly lit night club for the cold, impersonal air of a recording studio. This is jazz in action, jazz that creates a setting for the free expression of the soloist, and at the same time reaches down to the roots of the music and offers the primitive rhythms that are its origins. – Bud Katzel

Brazilian Soft Shoe
Afro-Jazziac
Ring A Levio
Afternoon Death
To Birdland And Hurry
Calypso John
The African Flute
Bacao
Carabunta
The Davis Cup
Answer Me
Posted by By Mark Betcher at 3:32 AM