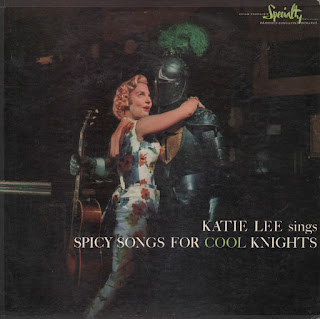 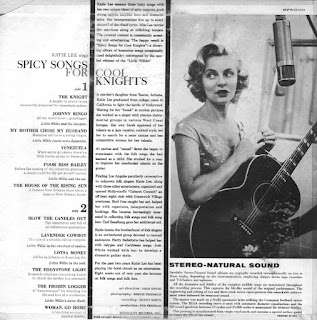 From the back cover: A rancher's daughter from Tuscon, Arizona, Katie Lee graduated from college, came to California to fight the battle of Hollywood. Waiting for her "break" in motion pictures she worked as a singer with obscure instrumental groups in various West Coast lounges. Her own harsh appraisal of her talents as a jazz vocalist, cocktail style, led her to search for more unique and less competitive avenue for her talents.

At parties and "casual" dates she began to experiment with the folk songs she had learned as a child. She studied for a year to improve her unschooled talents on the guitar.

Katie insists the brotherhood of folk singers is an uncharted group devoted to mutual assistance. Harry Belafonte has helped her with calypso and Caribbean songs. Josh White worked with her to develop a dramatic guitar style.

For the past two years Katie Lee has been playing the hotel circuit as an entertainer. Eight weeks out of very year she lectures on folk songs and folk lore.

From Billboard - December 16, 1957: There's something oddly attractive in the manner chirp Katie Lee handles this package of "spicy songs." Altho her voice lacks the range and polish of many other singers, it's adequate enough to attract sales, particularly among egghead, ex-urbanite class of buyers. Some of the selections might properly be termed folk tunes, i.e., "Venezuela." tho it's the title that will pique the interest.

The Knight
Johnny Ringo
My Mother Chose My Husband
Venezuela
Poor Miss Bailey
The House Of The Rising Sun
Blow The Candles Out
Lavender Cowboy
Lotsa Money
The Eddystone Light
The Frozen Light
Woman, Go Home
Posted by By Mark Betcher at 11:40 AM