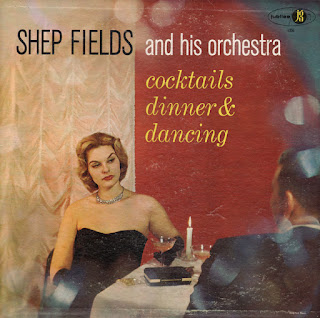 From Billboard - December 2, 1957: There's nothing "rippling" about this set, even if the lengthy notes say so. Most of the selections spotlight a cocktail type piano with rhythm accompaniment, with a few others featuring strings as well. It's fairly attractive listening music which, on the basis of the name, can probably sell some copies, especially in Field's home base area of Houston.

The Billboard reviewer is too kind. This set is stylistically unfocused and a bit of a budget mess.

From the back cover: The orchestra: Shep Fields and His Rippling Rhythm.

A sound, a distinctive sound, one that can be instantly recognized and identified with a singer or an orchestra, is a requisite for success in music. No sound is more easily recognized than the Rippling Rhythm that has helped keep Shep Fields at the top of the musical heap for more than twenty years.

She was born and educated in Brooklyn. At Erasmus Hall High and St. John's University until his father's death made income necessary. He had started his band in high school, played dances and proms all over Metropolitan N. Y. When he left college, he picked up the band business again. Soon he was looking for that distinctive sound. He tried hundreds of musical innovations. None gave him the thing he sought.

Then, in an off-moment, at a soda-fountain, a voice humming through a straw gave him the musical idea that became his "Rippling Rhythm". Fields parlayed the sound of the soda straw into a million-dollar" enterprise. He and his music have been heard coast-to-coast, sold millions of records, appeared at such as the Waldorf-Astoria, Statler in New York, Paramount Theatre, Meadowbrook, Ambassador in Los Angeles, Glen Island Casino, etc,. etc., etc.

In 1952-53, Shep and his orchestra began playing the "Prom" and Xmas Season in Texas and around the Southwest. He liked the territory so much he decided to make Houston his headquarters. So, for more than 3 years now, he has been affiliated with the Shamrock-Hilton Hotel there, playing for 3 to 6 months each year. His band plays the rest of the year on tour around the Southwest at special Civic functions, dances at Colleges, etc. For more than two years, Shep was a Disc Jockey in Houston.

If I Could Be With You
I Can't Get Started
Let's Fall In Love
Linger Awhile
The Way You Look Tonight
The Night Is Young And You're So Beautiful
Soft Lights And Sweet Music
One Night Of Love
Honey
Love Is The Sweetest Thing
Sweet And Lovely
Three O'Clock In The Morning
Posted by By Mark Betcher at 3:44 AM