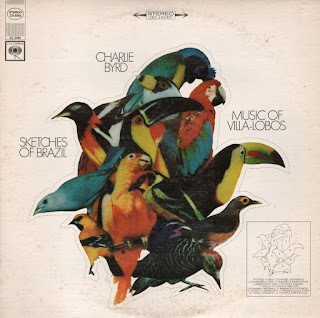 From Billboard - February 24, 1968: Charlie Byrd, popular jazz guitarist, is also Charlie Byrd, classical virtuoso. Byrd in his latest LP plays a group of etudes and preludes by Heitor Villa-Lobos, the Brazilian composer. Though complex to the dedicated guitarist, Byrd perform these pieces with polish and precision, offering the listener a delicately woven mood session with a master on the solo guitar.

From The back cover: That is what music, and all other art, for that matter is all about – a torrential river born of innumerable tributaries. In this collection, the masterful Charlie Byrd navigates the monumental tributary that is Heitor Villa-Lobos (1887-1959). This remarkable prolific Brazilian composer wrote hundreds upon hundreds of works, including five operas, fourteen ballets, choral works, orchestral and chamber music as well as his famous Bachianas Brasileiras. Here he is represented by a group of Etudes written in 1929 and Preludes composed in 1940 for solo guitar. They are complex enough to challenge the guitarist but delightfully accessible to the listener. Charlie Byrd plays them all with consummate dedication.