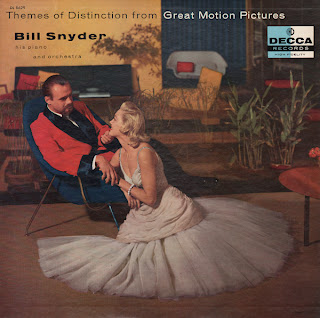 From the back cover: Bill, born in Chicago's Northwest side, was first inspired and taught in Moritz Rosenthal, a pupil of the renowned Franz Liszt and one of the greatest pianists of his time. Bill Snyder's first engagement with his orchestra was at the Mayfair Room of Chicago's Blackstone Hotel. He remained there a year and broke the long-run record as band leader and entertainer. Since then, with his "magic" piano – an air conditioned, custom built masterpiece in ebony, which took four years to build – Bill has made numerous highly successful recordings and has appeared in the finest supper clubs and night clubs throughout the country.

Invitation
That Night
Tammy
Love Is A Many-Splendored Thing
Fascination
Written On The Wind
Symphonie Moderne
Interlude
The Song From Moulin Rouge
Theme From Man Of A Thousand Faces
Laura
Alway All Boats
Posted by By Mark Betcher at 7:33 PM