You Don't Have To Say You Love Me - Raymond Lefevre 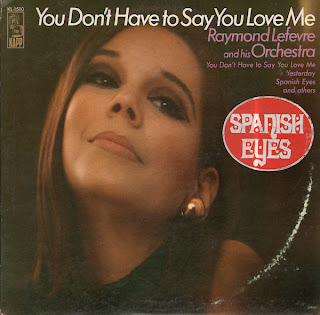 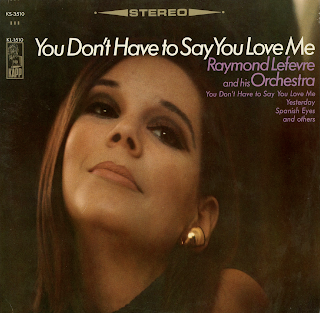 "Spanish Eyes" is a sticker fixed to the cover.

From the back cover: He (Lefevre) was born in Calais in 1929 and began his musical studies at a very early age with piano lessons and sight-singing under direction of his father. Soon he added flute and more formal piano studies at a Calais music school. By the time he was 17, Raymond had outgrown Calais musically, and went to the Paris Conservatory where he continued studying piano and flute, and added harmony and advanced composition. It was during this period that he became interested in popular music.

In the late 1940's through the early '50's, he toured Europe and South America with top-name orchestras.

On his return to France, Raymond became active in TV as director of his own orchestra. These days, his trim Van Dyke beard and his boyish smile, not to mention his lovely orchestral music, are highlights of the French musical scene. He records single records and albums that are popular all over the world, and he appears with his orchestra on several TV programs. His leisure time, what little remains, is spent with his wife and their two sons in their Parisian town house. – Dom Cerulli

You Don't Have To Say You Love Me
I Love
Yesterday
Love Is All Around
Palmares Des Chansons
La Passionate
Spanish Eyes
A Little Rain Is Necessary
La Boheme
Stars Of The Way
Tears Come
L'Amerique
Posted by By Mark Betcher at 4:59 PM