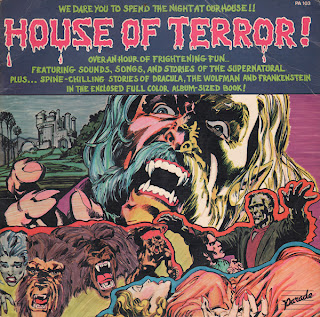 I've listened to a number of "Halloween" records since I've been collecting. I have to say, this is one of the best I've stumbled across. This is a 2 record set. There is also a nice comic book included (stapled to the spine). There are a few online references that suggest Neal Adams was the illustrator. Audio stories accompany the comic book.

Parade went the distance to create a great package by hiring good professional voiceover actors, writers and sound engineer(s) to create a fun recording. There are also a few musical numbers on one side. One of which starts out as a story and then morphs into a song (the sample above).
Posted by By Mark Betcher at 7:23 PM