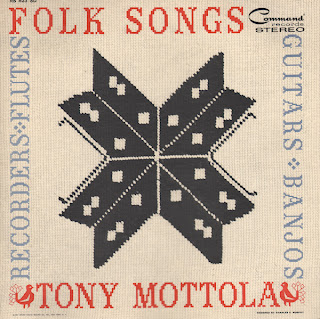 I wonder how this album sold for Command? When I spied the cover in the bin my first thought was that the record was an early 80s release because the cover graphic looked so "modern". Then seeing that it was a Command/Mottola project, from 1961, no less, I wondered if I should even bother because of the "folk" and "banjo" references on the cover. I wasn't keen on spending money on a "folk" album.  Of course, I took the chance on Mottola.

A buyer in the early 60s may have wondered about the cover/contents just as I had. The album is filled with period Command light pop approaches (almost cartoon-like music... not to say that approach isn't fun) and more subtle, but Command updated covers of traditional folk tunes.

You get all that for better or worse along with the typical superb Command engineering.
Posted by By Mark Betcher at 8:04 AM