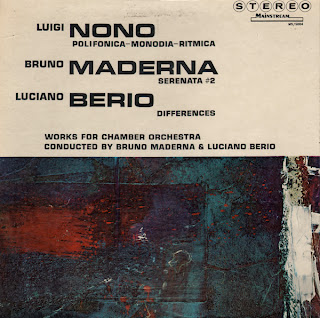 I believe this is a 1970 reissue of a TIME Records (58002/mono). Both albums features the exact same cover (book-fold) design. Available from online vendors so I will not be posting a sample.

From the inside cover: Differences, (1958)-(1960) by Luciano Berio, demands the most from the listener and promises him the greatest rewards in return; not only because of the scope of its proportions but also through the abundance, diversity, and unusual character of the elements set into motion. The work makes use of multi-channel tape and five instruments – flute, clarinet, harp, viola and cello (which, recorded directly on the central loudspeaker, provides a line of direction for the work's development). More or less elaborate sound materials, played by all the instruments, are recorded to provide the substance of the accompanying tape, where they appear either in their original form or more or less altered by electro-acoustical means. In this recorded version the tape sounds are placed left and right of the "living" instruments and also at the center behind them (to give a recorded "optical illusion").
Posted by By Mark Betcher at 2:42 PM