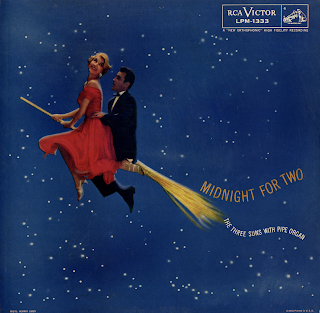 From the back cover: Al Nevins recruited Sid Ramin, arranger extraordinary, and planned this project step by step. Sid Ramin, well seasoned by years of conjuring the spectacular scores of the Milton Berle TV shows and many other choice assignments, delivered the Three Suns with a new sound. The taste, talent and style remained the same, however – the addition was a to be only one more person with a tremendous calling – the pipe organ. One of New York's largest theaters was then recruited to cage the nightly pipe organ with the Three Suns. Take a few standards, sprinkle with brightness, add a fresh face and another enchanting album is completed.

Ray Bohr has excellent on the pipe organ and presented a new friend with the Three Suns. Twelve arrangements, delightfully planned by Sid Ramin, are coupled on one disc to provide an experience after dark for the most discriminating. – Noel R. Kramer

The World Is Waiting For The Sunrise
When Yuba Plays The Rumba On The Tuba
Memory Lane
Blue Tango
I Don't Stand A Ghost Of A Chance
Intermission Time
Stella By Starlight
Cumana
Midnight For Two
Ain't Misbehavin'
Let's Call The Whole Thing Off
The Very Thought Of You
Posted by By Mark Betcher at 7:28 PM