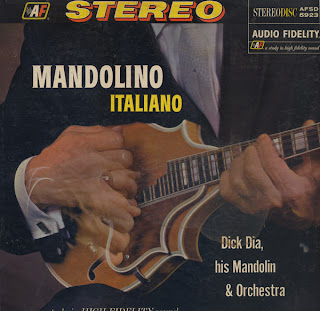 There are a few great "space age" mandolin tracks on this LP. As usual, Audio Fidelity comes through with slightly off beat take on traditional music.

Not much to be found on Dia. From the back cover: "For many years he has had his own orchestra, and also served as musical director of New York Radio Station WOV for fifteen years. He also apparently played with Perry Como, Jackie Gleason, The Ames Brothers and Johnny Desmond.
Posted by By Mark Betcher at 6:38 PM