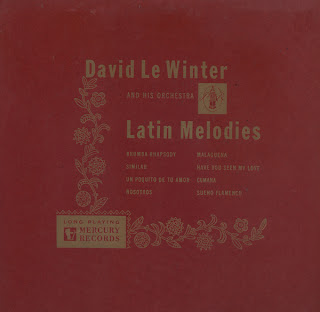 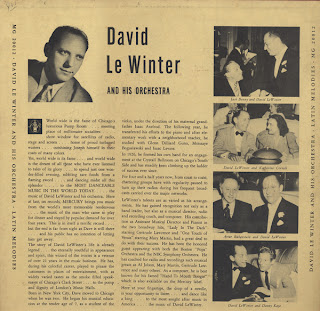 When I first flipped by the album I thought it was a classical music LP. Then I saw the word "latin" and pulled it out to give a closer look. The jacket is very heavy cardboard. The cover is a faux leather or leatherette. And the record itself is probably the heaviest vinyl I've held in my hands. I didn't have much hope for it, but this turns out to be a terrific set from a lively small Latin combo. From the many recordings I've listened to from the period, this is inventive and sparkling stuff.

From the back cover it appears as though Le Winter was playing "Chicago's luxurious Pump Room" at the time he recorded this album. The photos on the rear cover were apparently "grip and grins" taken at The Pump Room. Also, it appears as though he was no early comer to nightlife, playing at the time the notes were written, 21 years in speakeasies to London's Music Halls. He also played with the Boston Pops Orchestra and the NBC Symphony Orchestra.