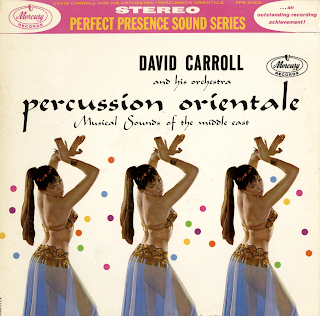 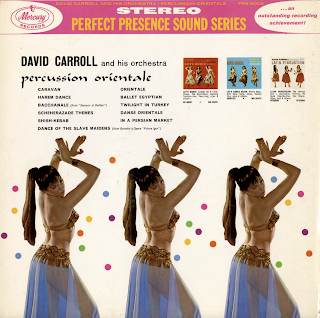 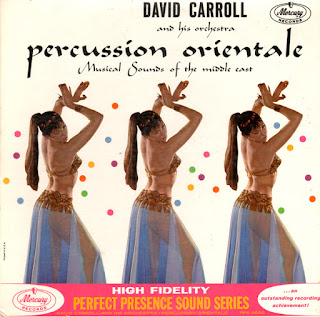 The solo flute passages are by Wally Preissing, solo oboe passages by John Cameron. When two ones play, Bob Tootelian joins Cameron. The Bakoura solo on Twilight In Turkey is by Mike Simpson. The solo violin passages are by Fritz Siegal

Mike Simpson arranged Caravan and Twilight In Turkey. All other arrangements by David Carroll.

From the inside cover: Mercury's David Carroll is a stereo devotee. He's a well-trained, quality conscious musician, too. This combination enables him to create albums of musical worth and stereo satisfaction. He's not concerned with stereo gimmicks, filling speakers for the sake of filling speakers. and his devotion to music is sufficiently vital to prevent him from recording first-rate music with inferior presence. His albums for Mercury have stressed the blend of top-notch stereo and meaningful music. In his Let's Dance, Let's Dance Again and Latin Percussion sets, his insistence on high standards is evident. It's obvious again in this impressive package, Percussion Orientale.