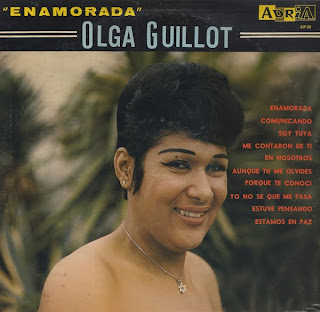 This album appears to have been recorded in the early 60s and pressed on a budget label. Olga Guillot has many recordings to her credit.

She was an anti-Castro Cuban who got out of the country in 1961. Her work was and or is still banned in Cuba due to her opposition to the socialist dictatorship. She was an activist for a free Cuba until her last days.
Enamorada
Comunicando
Soy Tuya
Me Contaron De Ti
En Monsotros
Aunque Tu Me Olvides
Porque Te Conocí
Yo No Se Que Me Pasa
Estuve Pensando
Estamos En Paz
Posted by By Mark Betcher at 11:43 AM