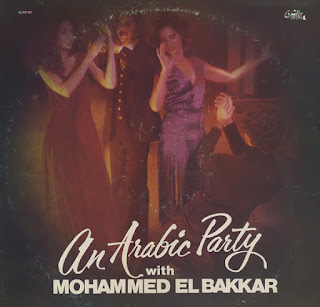 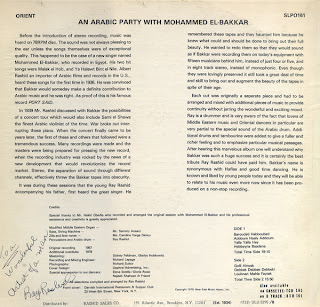 Aside from the curious cover photo shot at Darvish International Restaurant & Supper Club, 23 West 8th Street, New York, N. Y. there is an interesting story behind this recording.

Apparently (from the back cover), the original recording was made in 1957 with "additional overdubs" being added in 1979 when this album was finally pressed.

A man referred to a Albert Rashid "discovered" El Bakkar who was popular in Egypt in 1930s. Albert, who imported records and movies into the U. S., wanted to introduce El Bakkar to the American market. WWII interrupted those plans. Recordings were made later after the war (1957?). But then emerging stereo technology effectively shelved the project.

Ray also autographed the back cover. You can find a photo of Ray with his family celebrating Christmas with with El-Bakkar on this website.


Researching further, I found that there are a number of El-Bakkar recording released in the U.S. with some of the best cheese cake covers I've ever seen.

El-Bakkar died at the age of 46 in 1959. He was stricken while he was preforming in the Broadway stage hit, Fanny.

I was wondering when these other recordings were made (the other albums found online)? And why the tapes featured on this 1979 album were shelved so long? And why, on this late release, are there no mentions any of this history?
Posted by By Mark Betcher at 4:57 PM