Surf City - The Lively Ones 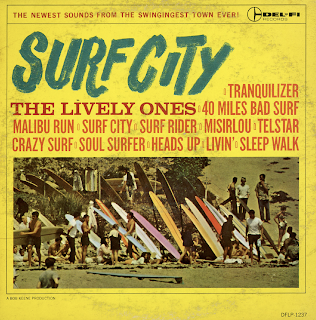 The surfing craze has hit the city. Unfortunately there's no surf to go along. But this isn't bothering anyone. Least of all the teenagers.

Dick Kemp, popular teen-idol at WYNR, the big McLendon Corporation rocker, has been walking around with a surfboard for the past week. He carries it everywhere, into restaurants, offices, stores, on the street, and claims he even sleeps with it at his bedside.

Kemp has been asking the kids on the air to tell him where he can go surfing. Some of the replies are classic. It all boils down to "there's no surf in the Windy City," but so far nobody seems to care.

The radio promotion is all part of a "Win a Hearse" contest being sponsored nationally by Del-Fi Records. For those who don't know, a hearse or woodie, is the chick way for a surfer to arrive with his board.

Potter, the local Del-Fi distributor, is placing coupons in local records stores. Kids are being asked to fill in their names. In a few weeks, Kemp will announce the winners on the air.

First prize is a hearse, second prize a surfboard (in fact, there'll be a number of surfboards) and after that a number of Del-Fi surfing albums.

Kemp, like any good surfer, already owns a hearse, and is using it to drive around the city. He makes quite a sight pulling up at the London House, stepping out with his surfboard, and going inside to eat a surf-burger.

Retail reaction to the surfing craze has likewise been excellent. Both Fred Sipiora at Singer One Stop and Russ DiAngelo at Music Box report strong action.

Hottest seller, according to both one-stops, are "Surfin' USA," the Beach Boys on Capitol, and "Surfing' With The Astronauts on RCA Victor.

Singer and Music Box also reported calls for "Surf Ciyt" LP by Jan and Dean on Liberty which hasn't even been issued. The album is a follow-up to Jan and Dean's "Surf City" single which is doing very well.

Sipiora reported good action on "Wipe Out" by the Surfaris on Dot (a single). DiAngelo, who last week kicked off a "Go With Surfing' for Summer Sales" campaign in his one-stop, also reported action on the following list of albums; "The Original Surfer Stomp," "Surf Stompers, Del-Fi; Surfin' Safari," Beach Boys, Capitol; "Wipe Out," Impacts, Del-Fi; "The Original Surfer Stomp," Bruce Johnston, Del-Fi; "Surf Rider," the Lively Ones, Del-Fi; and Surf Drums, the Lively Ones, Del-Fi.

But There's No Surf

Just how far the surfing kick will go is, at this point, anyone's guess. To be coldly practical, the biggest body of water in the area is Lake Michigan. It's known for swimming, fishing, sailing, big waves, but no surf. Not even a small one.

A surfboard might be used for paddling around, but that's about all. But then, who's coldly practical. Certainly not the teen-agers. They think it's all a great idea, and if there's no surf, so what? There'll always be other things they can do.

They dress like surfers (White duck pants and sport shirts have become very "in"). They dance like surfers. They dig the surfing records and music "the most." And as for the part about going to the beach, what else does anyone do in Chicago during the summer – especially if you're a teen-ager.

To sum it up, surfing seems to have a good, healthy appeal, and the betting is that the landlocked Midwest will get as much mileage out of it as any area.