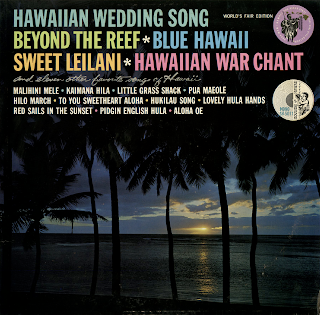 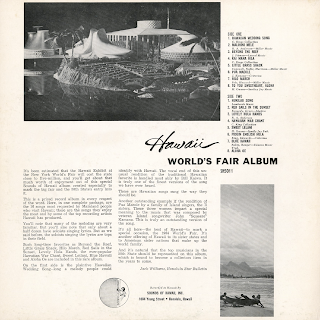 From the back cover: It's been estimated that the Hawaii Exhibit at the New York World's Fair will cost the state close to five-million, and you'll get about that much worth of enjoyment out of this special Sounds Of Hawaii album created especially to mark the big fair and the 50th State's entry into it.

This is a prized record album in every respect of the word. Here, in one complete package, are the 16 songs most requested by Mainland people who visit Hawaii; these are the songs they enjoy the most and by some of the top recording artists Hawaii has produced.

On the first side is the plaintive Hawaiian Wedding Song – long a melody people could identify with Hawaii. The vocal end of this unusual rendition of the traditional Hawaiian favorite is handled most ably by Bill Kaiwa. It is truly one of the finest versions of the song we have ever heard.

These are Hawaiian songs sung the way they should be.

Another outstanding example of the rendition of Paua Maeole by a family of Island singers, the Ii Sisters. These three women impart a special meaning to the music that was composed by veteran Island songwriter John "Squeeze" Kamana. This is truly an outstanding version fo the song.

It's all here – the best of Hawaii – to mark a special occasion, the 1964 World's Fair. It's another offering of Hawaii to its sister states and to American sister national that make up the world family.

And it's natural that the top musicians in the 50th State should be represented on this album, which is bound to become a collectors item in the years to come . – Jack Williams, Honolulu Star Bulletin