Dixie "On The Rocks" - Dave Remington 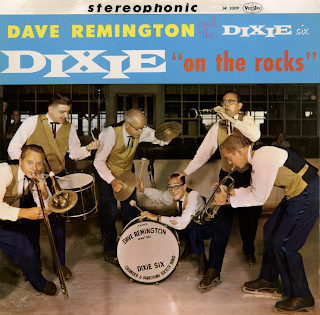 From the back cover: Dave Remington, at 33, has proved that realism pays off. His career has been one of preparations and reward, characterized by initiative and logic. Born in Rochester, N. Y., he majored in economics at St. Lawrence University, then spent several years in law school. Before that, he had spent eight years (from 7 to 15) at the Eastman School Of Music, studying theory, piano, harp and trombone. His father, Emory B. Remington, is an instructor of Trombone at Eastman (and served as first trombonist with the Rochester Philharmonic for more than 25 years). His sister Janet is solo harpist with the Pittsburgh Symphony. In the early '50s, Dave investigated Jazz. He replaced the late Dick Twardzik as pianist with the quartet headed by baritone saxist Serge Chaloff. In June, 1953 he formed his own trio and spent more than a year with it in Aspen, Colorado (Dave has an eye for environment, you will learn). A phone call from childhood friend-trumpeter Dick Oakley in late '54 brought Dave into the coterie known as the Salt City Five. During an appearance by that group at Chicago's Blue Note the following year. Dave's wife presented him with their first child and Dave decided to end the road routine and settle in Chicago.

He worked as "a slave laborer" in an ink factory until his local AFM card was issued, then returned to jazz. One of his first jobs came to an end when, in a burst of Capone-era-revisited competition, an angry faction tossed a few sticks of sizzling dynamite through the club's window. The event convinced Dace that better jobs existed and and he moved on – to work with Muggsy Spanier, Georg Brunis and with Dixie groups at the suburban Red Arrow and at Jazz Ltd. in Chicago.

Until mid-1956, he played piano on all jobs. In that year, he decided to switch to trombone (he'd played it professionally only during one summer's string of engagements six years before) and has remained with it, doubling on piano. On May 14, 1958, Dave was invited to bring his Dixie Six – the group that won the Arthur Godfrey Talent Scouts Show in December, 1957 – to the Wagon Wheel Lodge in Rockton, Illinois, a chic retreat 92 miles from Chicago's Loop. Dave and his cohorts have been there ever since.

The group works six nights a week at the lodge, playing in a ballroom that serves two dance floors; on the seventh night they either rest of accept offers to play local country club affairs. Dave, his wife and three children live in a ranch-style, three-bedroom home in nearby Rockford township. During the day, Dave golfs and gardens. At night, the members of the group emerge from their comfortable homes (Dick Oakley, the only bachelor, has a private apartment in the lodge and strolls to work), hop in their cars and make it to the Wagon Wheel.

It's a life most musicians would envy. Dave Remington found it because he searched diligently for it. And the members of his group couldn't be happier – safe from the cries and the crying of the city and encouraged by the security the Wagon Wheel represents (in more than two years the owner of the place, Walter Williamson, has spoken with Dave just three times. A rare type, he doesn't tell the musicians what or how to play.)

Oakley, the trumpet stalwart, is a veteran of the Jack Teagarden group, as good company as traditional musicians can keep. He's been playing trumpet since he was 15 and as a teenager was jamming with Remington in Rochester.

Clarinetist Chuck Hedges has been a pro for just three years, but has packed into that time tour with Georg Brunis, Wingy Manone, Art Hodes and the crew at Jazz Ltd.

Pianist Mel Grant has had vast jazz experience, including stints with the groups of Muggsy Spanier, Jimmy McPartland, Doc Evans and Burins. Bassist Joe Levinso (replaced recently buy Chicagoan Paul Lidell) hold a master's degree from the University of Pennsylvania. He worked at CBS in Chicago and with both Dixie and modern (Barbara Carroll trio, Ed Higgins trio and with pianist Dick Marx) groups. Shortly after this LP was out, Levison headed for New York and was last heard from as bassist with a group that included Bud Freeman and Jimmy McPartland. Drummer Wayne Gormley has worked with Hodes, Brunis and at Jazz Ltd. (In a post-session change, Wayne moved on and was replaced by Frank Duffy, a 30-year old modernist who has worked with Sonny Stitt, Wilbur Ware and others. Duffy, more than content with the Wagon Wheel atmosphere, is spending his days completing work, on his bachelor's degree in English at Beloit College.)

Remington, Oakley, Hedges, Grant, Levinson and Gormley – the Dave Remington Dixie Six your hear here – are a versatile crew. "I think we've got a good band," say Dave. "We'er not strickly a Dixie band. We play modern trio things, too, in the healthy Wagon Wheel setting, in addition to the Condon-type things the entire group plays, for dancers and listeners." he adds.