The Best Of Bill Evans 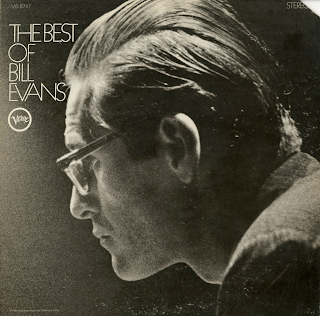 Spartacus Love Theme and How About You were recorded at Webster Hall, New York, January and February, 1963. Engineer: Ray Hall. Personnel: Bill Evans (three pianos). Originally released on the Verve album Conversations With Myself (V6-8526).

I've Got You Under My Skin was recorded at Rudy Van Gelder Studios, April 7 and May 10, 1966. Personnel: Bill Evans, Jim Hall (guitar). Originally released on the Verve album Intermodulation (V6-8655).

Available from online vendors so I will not be posting a sample. Presented here to share the original cover and jacket information.

From the inside cover (book-fold): In order to set in perspective the contribution of this sui generis artist to the music of our time, it is necessary to shift gears into reverse, to arrive at a point in the mid-1950 when, after paying several years of anonymous dues with the likes of Jerry Wald and Herbie Fields, Evans first gained a measure of recognition as a member of the Tony Scott Quartet. This was the first "name" jazz-group of any consequence with which he was heard extensively in New York

It was immediately apparent that Evans was bringing to the piano certain qualities that were new to jazz; or if not new, at least generally underdeveloped, perhaps consciously avoided. He played with a rare subtlety, a gentleness and finesse that seemed at that point in our evolution to have gone out of style.

One critic, some years ago, went so far as to assume that because these characteristics were endemic to the Evans style, he was faced with a problem in communicating emotionally with his audiences.

As it turned out, nothing could be further from the truth. As far back as 1958 (the year in which he spent some nine months as a member of the Miles Davis Quintet) it was apparent that the introspective nature of Evan's work was the very element that focused attention on him. He had, and has something in common with the gifted actor who, irritated by too much coughing in the house, begins to speak his lines so softly that the audience immediately subsides into respectful silence.

Of course, it is not any deliberate attempt to command concentration of a Burbeck, the overwhelming contagious swing of a Peterson, the beguiling eccentricities of a Monk, seem better designed to establish a rapport with the audience. With Bill Evans, fortunately, the process works in reverse, as I observed at Shelly's Manne-Hole in Hollywood.

A mood of peace and quiet suffused the club from the first chorus of the first song. The spun-glass delicacy of Bill's articulation, the respect he showed for every melodic line, the manner in which he embellished each, seemingly with more harmonic innuendos that the musical laws would allow – these were among the values that held his listeners. It was as though he were using the keyboard as a propaganda medium for the return to jazz of serenity and sanity.

Of course, there are musical explanations of his achievements, some of them too complex to be detailed without going into excessive technical minutiae. Any pianist will tell you that his use of the pedals has something significant to do with it; any musician will point to his oblique use of inner voices in the chords, and of the conversation of seeming dissonances into consonance. It was once said, too, that his use of grace notes was ingenious enough to give the impression that he was actually bending notes.

All these components, along with the hundred others that have elevated Evans to a position of universal respect among sensitive musicians and fans, can be found in the nine tracks that finally earned the honor of a position in this album. – Leonard Feather (Author, The Encyclopedia of Jazz In The Sixties)

I Believe In You
Spartacus Love Theme
Danny Boy
My Foolish Heart
I've Got You Under My Skin
Beautiful Love
Valse
Bemsha Swing
Posted by By Mark Betcher at 6:22 PM