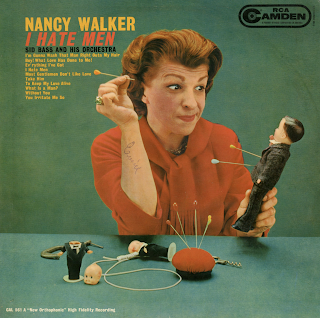 From the back cover: Nancy has had a very long career in the theater, mainly because she crawled out on the stage once at the pre-Equity age of ten months. Her parents were vaudeville stars and Nancy is of the true born-in-a-trunk tradition. As a youngster she tagged along with her father, Dewey Barto, on vaudeville tours throughout the United States and Europe.

In her first New York roles, Nancy amassed reviews and a reputation as a triple-threat musical performer – this appellative meaning that in addition to acting and singing, she was also one terrifically funny young lady. Her first performance in "Best Foot Forward" led to parts in "On The Town," "Look Me, I'm Dancin'," "Along Fifth Avenue" and "Pal Joey."

Amid all this Nancy found time to sign a Hollywood contract which culminated with her creation of riotous roles in "Broadway Rhythm" and the screen versions of "Girl Crazy" and "Best Foot Forward." Recent stage successes have included "Copper and Brass" and a revival of "Wonderful Town," both in 1958.

A year earlier Nancy had journeyed from musical to straight comedy in the Noel Coward play "Fallen Angels." In the eyes of many critics, Nancy's performance overshadowed all else, and it was not an indisputable fact that Nancy Walker was a comedienne of the first order.

Nancy has had one bad break, which, however, promptly turned into a good one. While singing during a performance in 1951, she suddenly discovered that she had lost her voice. Unable to sing a note, she took her troubles to vocal coach David Craig. Within a few months, Nancy found she could sing again... and also found that she was Mrs. David Craig.

Her latest success in the revue "The Girls Against The Boys," with Bert Lahr, Shelly Berman and Dick Van Dyke. She is the darling of comedy writers, who realize that few can sell a song, a skit, or a show as well as Nancy Walker. – Notes by Frank Jacobs

Everything I've Got
Take Him
I'm Gonna Wash That Man Right Out Of My Hair
To Keep My Love Alive
Without You
You Irritate Me So
Boy! What Love Has Done To Me!
Most Gentlemen Don't Like Love
I Hate Men
What Is A Man?
Posted by By Mark Betcher at 7:19 PM