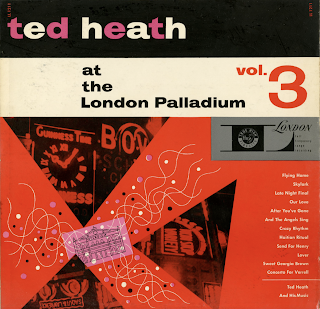 From the back cover: The series of Sunday concerts organized for the Ted Heath Orchestra at the London Palladium has brought this opportunity to record Britain's premier big band playing many of its more ambitious arrangements. The arrangements less suitable to the band's style when playing for dancing, but which serve to illustrate the band's tremendous power when given the setting of the concert platform. The Palladium concert series began as an experiment in 1945, when the leader was struggling to make the orchestra a successful, paying proposition. Today, when Ted Heath's name stands as a collossus over the British musical profession the Palladium concerts can point to the uphill battle and the ultimate success. The Heath band with this concert of February 20th, 1955, represents a complete musical institution, equipped with the best musicians and scoring minds available in Britain. The precision of the section work, the full impact of the ensemble and the general taste in presentation have set a high standard. A standard which still places Heath before any other British bandleader. _ Raymond Horricks