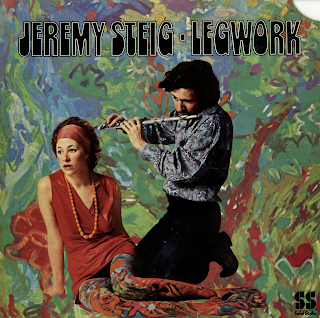 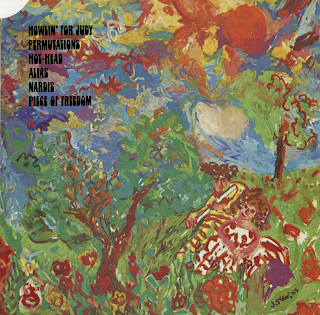 From the inside cover: The depth as well as breadth of Jeremy's accomplishments in this set requires, I think, some background about the Steig odyssey in order to indicate the range of musical experience he's been into. Born in New York's Greenwich Village on September 23, 1942, Jeremy is of a family that has impressive creative credentials. His father, William Steig, is a cartoonist of antic universals for The New Yorker and the author-illustrator of uniquely evocative children's books. Elizabeth Mead Steig, Jeremy's mother, is an artist and heads the art department at Lesley College. An aunt is Margaret Mead, the persistently probing anthropologist who keeps showing ways in which divergent cultures and generations can make connections.

After schooling in New York at the Little Red School House, City and County, and the Music and Art High School, along with three years of private study of the flute with Paige Brook, Jeremy began a wide-ranging journey into music. In addition to groups of his own, Jeremy has played in the past decade with, among others, Jim Hall, Feddie Redd, Paul Winter, Paul Bley, Tony Scott, David Amram and Bill Evans. He's also worked with bluesmen Junior Wells and Big Joe Williams, and has appeared in jazz clubs, rock rooms and in concerts that have encompassed Fillmore East and Fillmore West along with halls in Copenhagen, Munich, Frankfurt, Milan, Paris and London.

Although immediately and unmistakably identifiable by sound and style, Jeremy is so open to all kinds of music that he can fit into an unusually heterogenous variety of musical situations with zestful attentiveness. From 1966 to the present, for example, among the players and units Jeremy has sat in with are Jimi Hendrix, the Jefferson Airplane, Blood, Sweat & Tears, Paul Butterfield, Elvin Bishop, Earth Opera, Buddy Miles, the Flying Burrito Brothers and James Cotton. I mention the to underline his refusal to be limited by traditional categories. As I noted, Jeremy is a motif directly from Howlin' Wolf. – Nat Hentoff

From Billboard - May 30, 1970: Flute player Steig has been moving, of late, in very mixed company. He appears on one date with jazz pianist Bill Evans and next sits in with the Flying Burrito Brothers or Jimi Hendrix. He reflects this wide open taste in his playing which sprinkles Miles Davis, Roland Kirk and Howlin' Wolf (as in "Howling for Judy") in one chorus. Small group backs him here but it is made large by some tricky overdubbing. Rock and jazz appeal here.

Howlin' For Judy
Permutations
Hot-Head
Alias (a li'as)
Nardis
Piece Of Freedom
Posted by By Mark Betcher at 3:19 PM