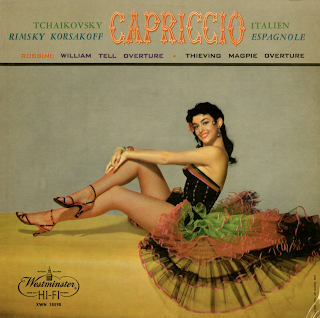 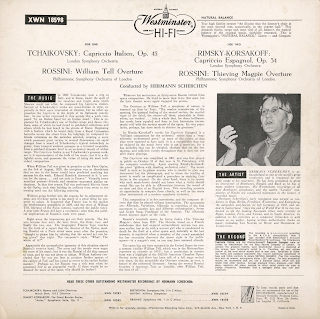 From then back cover: Hermann Scherchen is acknowledged as one of the world's great conductors and is renowned for the wide range of his repertoire. He has been acclaimed as great an interpreter of Beethoven, Handel and Bach as he has of many modern composers. His Westminster recordings of all nine Beetoven symphonies and the twelve "London" symphonies of Haydn are considered milestone in the history of recorded music.

Hermann Scherchen's early reputation was earned as conductor in Rigo, Berlin, Frankfurt Winterthur, and Konigsberg. An outspoken anti-fascist, he left Germany in 1932, and settled in Switzerland. Since the end of World War II he has conducted in all the leading European cities most recently in Rome, London, Paris, and Vienna, and in South America. In addition to his activities as a conductor Scherchen is well known as an author, having written authoritative books on music, including The Nature of Music and Handbook of Conducting.
Posted by By Mark Betcher at 5:02 PM