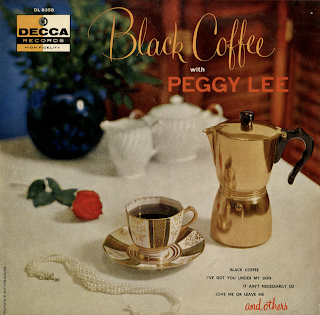 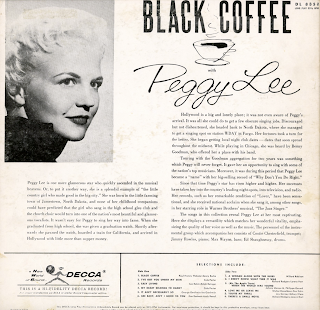 Excellent material, outstanding arrangements and Peggy at her absolute finest backed to perfection by a small studio group.

From the back cover: Hollywood is a big and lonely place; it was not even aware of Peggy's arrival. It was all she could do to get a few obscure singing jobs. Discouraged but not disheartened, she headed back to North Dakota, where she managed to get a singing job on station WDAY in Fargo. Her fortunes took a turn for the better. She began getting local night club dates – dates that soon spread throughout the midwest. While playing in Chicago, she was heard by Benny Goodman, who offered her a place with his band.

Touring with the Goodman aggregation for two years was something which Peggy will never forget. It gave her an opportunity to sing with some of the nation's top musicians. Moreover, it was during this period that Peggy Lee became a "name" with her big-selling record of "Why Don't You Do Right."

Since that time Peggy's star has risen higher and higher. Her successes have taken her into the country's leading night-spots, into television, and radio. Her records, such as her remarkable rendition of "Lover," have been sensational, and she received national acclaim when she sang it, among other songs, in her starring role in Warner Brothers' musical, "The Jazz Singer."

The songs in this collection reveal Peggy Lee at her most captivating. Here she displays a versatility which matches her wonderful vitality, emphasizing the quality of her voice as well as the music. The personnel of the instrumental group which accompanies her consists of Cootie Chesterfield, trumpet; Jimmy Rowles, piano; Max Wayne, bass; Ed Shaughnessy, drums.

Black Coffee
I've Got You Under My Skin
Easy Living
My Heart Belongs To Daddy
It Ain't Necessarily So
Gee Baby, Ain't I Good To You
A Woman Alone With The Blues
I Didn't Know What Time It Was
(Ah The Apple Tree) When The World Was Young
Love Me Of Leave Me
You're My Thrill
There's A Small Hotel
Posted by By Mark Betcher at 5:33 PM