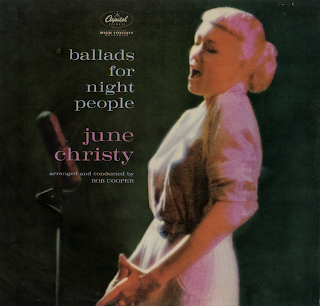 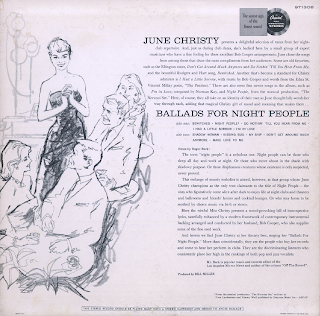 From Billboard - February 15, 1960: June Christy, the one and original, comes thur with her own special and attractive interpretations of a group of tunes for that amorphous group of fans known as Night People. The songs include such familiar items as "Bewitched" and "Do Nothing Till You Hear From Me" and such unfamiliar efforts as "Night People" from the recent show, "The Nervous Set," and "I Had A Little Sorrow," based on Edna St. Vincent Millay's "The Penitent." Miss Christy with backing by Bob Cooper chants them all endearingly.

Bewitched
Night People
Do Nothin' Till You Hear From Me
I Had A Little Sorrow
I'm In Love
Shadow Woman
Kissing Bug
My Ship
Don't Get Around Much Anymore
Make Love To Me
Posted by By Mark Betcher at 5:10 PM