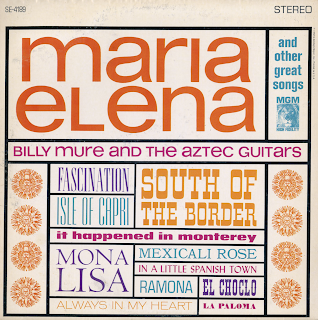 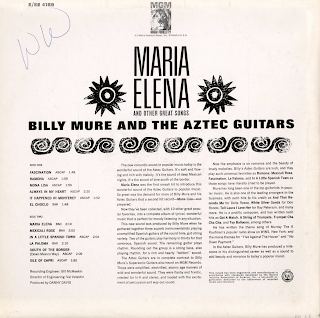 From the back cover: Mure has long been one of the top guitarists in popular music. He is also one of the leading arrangers in the business, with such hit to his credit as "And That Reminds Me" for Della Reese, "White Silver Sands" for Don Rondo, "Tell Laura I Love Her" for Ray Peterson, and many more. He is a prolific composer, and has written such hits as "Got A Match," "A String of Trumpets," "Trumpet Cha Cha Cha," and "Toy Balloons," among others.

He has written the theme song of Murray K. Kaufman's popular radio show on WINS, New York; and the movie themes for "Five Against The House" and "No Down Payment."

Fascination
Ramona
Mona Lisa
Always In My Heart
It Happened In Monterey
El Choclo
Maria Elena
Mexicali Rose
In A Little Spanish Town
La Paloma
South Of The Border (Down Mexico Way)
Isle Of Capri
Posted by By Mark Betcher at 3:28 AM