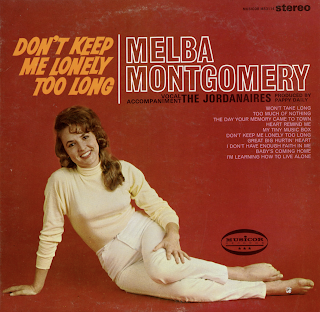 From Billboard - October 26, 1966: Dealers have a built-in success factor with Melba Montgomery – anything by here is bound to be a winner, as will be this LP containing emotion-packed versions of "Great Big Hurtin' Heart," "Baby's Coming Home" and "My Tiny Music Box."

From the back cover: When lovely, brown-eyed Melba Montgomery signed on with the renowned Roy Acuff and his Smokey Mountain Gang a few years ago, it was the start of an amazing success story. Here was a singer who, soon enough, was to assume the mantle of the new Queens of Country Music, without having a recording of any kind on the market.

Unusual? Unorthodox? Yes sir, but then Melba Montgomery herself has a unique quality about her singing and songwriting that lifts her considerably beyond the level of the newer country music stylists who've come along in recent years.

Barely 20, at the time, Melba had arrived in Nashville as one of six finalists in a nationwide Pet Milk contest. Acuff, a veteran of the overseas circuit, had been seeking a new girl singer to join a planned tour of U.S. bases in Europe. Melba won the job hands down and stayed with Roy and his group for four years, learning the invaluable lessons and traditions of show business.

At the close of one of the many Acuff in-person tours, Melba was introduced to the famed country music record producer, Pappy Daily, who had been instrumental in building a number of the great artists in country music, immediately signed her to a recording contract. Shortly thereafter, country record fans were hearing the haunting new voice of Melba Montgomery on a duet record with George Jones, another top country star in whose career Daily played a key note.

Melba's duet appearances with Jones on such outstanding hits as "We Must Have Been Out Of Our Minds," have become notable collector's pieces in country music. Firmly established as a duet star, Melba later became a hit-making soloist and in 1963 she received virtually all the annual trade paper and disc jockey awards as the year's most promising new country girl singer.

She has continued to turn out new hits and as both soloist and as a duet star with both George Jones and more recently with Musicor's pop king, Gene Pitney, who, in the meantime, has carved out a solid country following for himself.

Won't Take Long
Too Much Of Nothing
The Day Your Memory Came To Town
Heart Remind Me
My Tiny Music Box
Don't Keep Me Lonely Too Long
Great Big Hurtin' Heart
I Don't Have Enough Faith In Me
Baby' Coming Home
I'm Learning How To Live Alone
Posted by By Mark Betcher at 1:27 PM