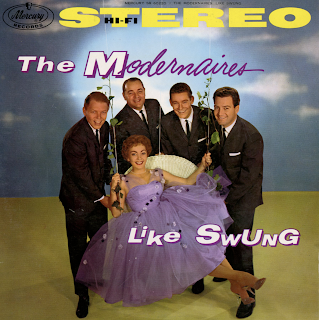 From the back cover: All five members of The Modernaires (Paula Kelly, Hal Dickinson, Alan Copeland, Vernon Polk and Chuck Kelly) have always believed in progressing with the times, "Copeland informs, "And this new album is our future direction," he adds.

Senior and founder Modernaire Hal Dickinson declares; "The arrangers that we use, in addition to Alan, are all our very good friends who think, musically, as we do. And the Musicians in the orchestra (altoist Bud Shank and tenor man Bob Cooper, for example), are the best in the country."

From Billboard - March 20, 1960: One of the secrets of the continuing success of the Modernaires is the high quality of the group's arrangements, most of which are done by Alan Copeland. They make even the oldest standard pop tunes swing, while working in jazz elements for the edification of the more initiated listener. On either level they are in fine form on their latest "exemplified by their efforts of "Ja-Da Cha Cha Cha," "Shiny Stocking," "Like Young" and "Romantique."

If Dreams Come True
Don't Dream Of Anybody But Me
Shiny Stockings
What A Difference A Day Made
Ja-Da (Cha Cha Cha)
Now And Then
Everything's Coming Up Roses
Like Young
The Rockin' Ghost
Romantique
The Girl With The Long Black Hair
Sweeter Than The Sweetest
Posted by By Mark Betcher at 11:39 AM