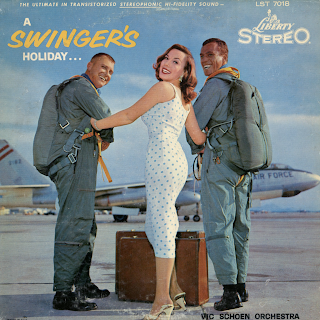 From the back cover: Our thanks to the officers and men of the Strategic Air Command, March Air Force Base, Riverside, California, for their help and cooperation in the production of this cover.

Also from the back cover: History is full of distinguished musicians who began at a very early age... Vic Schoen is one of them. He achieved success in early maturity with such popular recordings as the Andrew Sisters' "Bet Mir Best Du Schoen" (the last word of that title being an interesting coincidence!), "Beer Barrel Polka", "Apple Blossom Time" and "Rum And Coca Cola", to name a few. He has furnished music for some of the greatest names in show business – Bing Crosby, Al Jolson, Ella Fitzgerald, Bob Hope, Dick Haymes, Danny Kaye and many others. He worked with Crosby and Hope in several of the hilarious "Road" pictures: "Road To Rio", "Road To Morocco", "Road To Zanzibar" among others, and has conducted and written for the Dinah Shore Show, the Colgate Comedy Hour, and the Jack Carson TV Show. He has just concluded a very successful series on CBS-TV with Patti Page's "The Big Record". We feel that Mr. Schoen may well have another "Big Record" to his credit with "A Swinger's Holiday".

Heartaches
My Heart Swings
Six Days Before Never
If I Love Again
Paradise
That Old Black Magic
I Fall In Love Too Easily
Autumn Leaves
Nine Penny Theme
A Swingin' Holiday
I'll Always Be In Love With You
Marion
Posted by By Mark Betcher at 4:59 AM