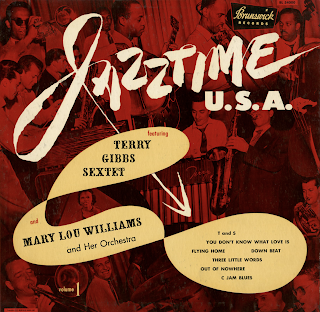 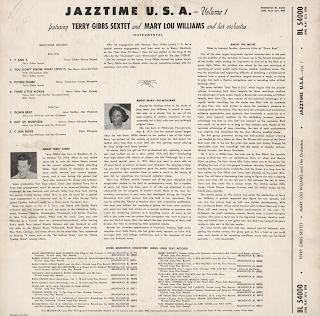 Terry Gibbs was born in Brooklyn, N. Y., on October 13, 1924. When he was twelve years old he won the Major Bowes Contest on the concert xylophone. While attending Tilden High School in Brooklyn he made many radio, theatre, and concert appearances, and it was during the period that Terry also mastered the drums and tympani.

Upon graduation from high school, Uncle Sam booked Terry for a three year engagement, which he served in an armored division. After discharge, he was featured over network radio from New York. During this period Tommy Dorsey asked Terry to join his band for a special coast engagement in a featured spot. A. D. (or After Dorsey) Terry joined Chubby Jackson's outfit for a three month European tour.

After his arrangement with Herman, Terry Gibbs joined T. D. for a special eastern engagement, and then went on to Benny Goodman on the "Star Time TV Show." Here he was picked as the king of the vibes by the "Downbeat" and "Metronome" polls for the year 1950-51.

On the strength of this honor, Terry Gibbs formed the group known as Terry Gibbs and his Sextet which was an immediate success with the customers and critics alike.

She was born in Pittsburg, Pennsylvania, May 8, 1911, and her musical career began when she was three. While seated on her mother's lap at the organ, Mary Lou picked out the melody of several tunes she had heard her mother play. Less than a year later she was earning money playing for local bridge and house parties.

At eleven, Mary Lou got her first professional job, replacing a pianist who had walked out on a show called "Hits and Bits." Graduating from high school with honors at sixteen, she left Pittsburgh for a tour that lasted several years. In 1931m Mary Lou went to work with an 18 piece band, as pianist, arranger, and composer. Her playing, arranging and her original compositions gave the entire ensemble the beat and inspiration that enabled them to make a mark in the history of jazz. All her recordings are treasured collector's items.

Mary Lou Williams quickly became one of the most respected and sought-after people in the field of contemporary music. For a number of years, her home has been open to all who are interested in and responsible for the progress of modern music. Many of the most far-reaching innovations in jazz were first during the frequent discussions and work sessions that are held in her apartment. She may be called the "Queen Of Modern Jazz" with undeniable justification. Few days pass without her receiving a phone call from some musician who seeks her help and advice on a musical problem or someone who wants her reassuring presence at a recording session. As many as ten calls per day come over her phone from youngsters who want to learn to play her kind of music. Mary Lou selects the most promising of these, and devotes her time to developing their potential talents.

Besides her countless appearances at American's leading night clubs, television and radio shows, she has given many concerts at Town Hall, Carnegie Hall, and college auditoriums, and is the composer of more than two hundred tunes.

Also from the back cover: On T. & S., a Gibbs tune, the solos are by Don Elliott, the versatile young ex-Shearing star, on mellophone; Terry on vibes; and Horace Silver on piano. On Flyin' Home Billy Taylor takes over at the piano; Kai Winding has one of his swingengest trombone choruses; Howard McGhee handles the trumpet chores brilliantly; and the climax is a long duet for four mallets by Don Elliott and Terry, both playing on the same vibraharp. You will have a fascinating time trying to figure out who is playing what, and when. All we can tell you is that between the two of them, Terry and Don make this a unique event. The rhythm section (Billy Taylor, Chuck Waye, George Duvivier, and Sid Bulkin) keeps up the frantic pace superbly.

The second group on this session was under the leadership of Mary Lou Williams, a greatly respected jazz figure for two decades and one who has always kept up with new stylistic developments. With her are Harold Baker, whose muted trumpet work in Down Beat and C Jam Blues will rank among the tastiest performances of the year; Vic Dickenson, the great trombone veteran; Morris Lane, a Lionel Hampton alumnus who plays a tenor sax in the big-toned Coleman Hawkins tradition; and Newell John, a new guitar star recruited from Loumell Morgan's combo to take part in this jam session.

We need hardly to add that with Don Lamond and Ed Safranski completing the rhythm section, this group gets a fine a beat as you could wish – and, thanks to the recording conditions, every man can be heard perfectly... and memorably.

T And S
I Don't Know What Love Is
Flying Home
Three Little Words
Down Beat
Out Of Nowhere
C Jam Blues
Posted by By Mark Betcher at 5:38 AM