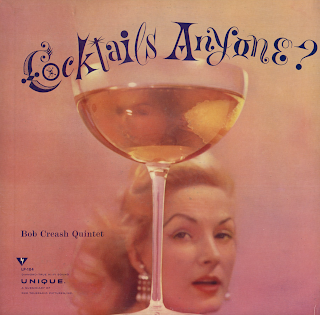 From the back cover: Usually a musician starts out and stays in one phase of the music business, but Creash has moved around a lot since his starts as a sideman in dance bands, with ventures into radio, television and personal accompaniment. Two stars backed by his able accompaniment are Denise Darcel and Jackie Gleason. Besides his fine musicianship as an accordionist and arranger, the versatile Bob Creash also has a great gift for story telling and entertains by the hour anybody he happens to be working with.

Known as a "musician's musician," Bob has worked in nearly every big night club and hotel in the East in addition to his radio and television work. Before going on his own, Bob played with such popular name bands as Tommy Tucker. Buddy Rogers, Enoch Light, Ray Block, and was a member of the staff bands for the Herb Sheldon radio show, Stork Club show, Igor Cassini show and Star-time on television.

For over seven years, Bob entertained the guests of the Hotel New Yorker which he regards as his "home-away-from-home." He then decided to concentrate his efforts on the recording end of the business. You can recognize a phrase or two of his on an Eddie Fisher hit record, or a June Valli performance. But note it's Bob's turn to be "up front" for a change.

Idaho
Smiles
Jeepers Creepers
If You Knew Susie
The Sheik Of Araby
Should I
Ain't She Sweet
Yes Sir, That's My Baby
Do You Ever Think Of Me
Bye Bye Blackbird
I Want A Girl
Shine
Posted by By Mark Betcher at 5:38 AM