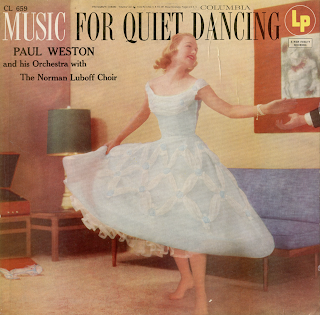 From the back cover: Born in Springfield, Mass., in 1912 Paul Weston attended Dartmouth College and here organized his first orchestra. The Weston touch was at once evident and after graduation he did further scholastic work at Columbia University. His interludes in the classroom were varied with extra-curricular work making the arrangements for Rudy Vallee and Phil Harris, among others, and shortly thereafter he began making arrangements for Tommy Dorsey and Bob Crosby,. His reputation as a dependable man with a musical idea spread quickly and he was summoned to the West Coast to do musical arrangements for such successful films as Holiday Inn and the Road To Morocco. Finding himself with a little time still left on his hands he began doing radio work as well and wound up with a number of network programs, accompanying vocalists and supplying musical interludes of his own. So successful were his contributions together with his recording artists that he soon had his own show for the Naval Air Reserve Recruiting campaign and a number of first rate popular songs to his credit including Day By Day and I Should Care. In 1950 he joined Columbia Records as West Coast Director of Artist and Repertoire and West Coast Musical Director.

Nevertheless
Dutch Treat
These Foolish Things
Anna
Maybe It's Because
Gigi
The Glory Of Love
The Song From Desiree
I Went Out My Way
Shane
The Morningside Of The Mountain
Planters Punch
Posted by By Mark Betcher at 8:33 AM