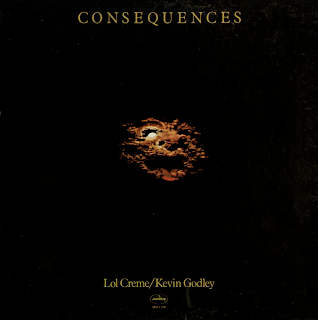 Billboard offered a fair assessment (posted below) of the boxed set. This expansive experimental sonic journey features a number of spoken word segments, some extended, that are bracketed by the mostly instrumental sides 1, 2 and 6. The spoken word segments, added up, were a bit much for me but I never lost interest in project as it played through. High quality, lavishly produced packaging.

From Billboard - November 12, 1977: This boldly experimental undertaking by the two former members of 10cc stands as an innovative rock achievement regardless of it often confusing story line. More important though, the duo unveil its own creation – the gizmo, a guitar-like instrument capable of producing violin and synthesizer sound among others. In between the unique sound effects that reproduce elements like fire and wind, are pieces of eccentric dialog and lyrics. Record one of the three-record boxed package is recorded solely with the gizmo while the remainder is composed on guitar and percussion. Sarah Vaughan makes a guest appearance and Peter Cook wrote and performs the dialog. A 20-page color libretto is enclosed which details the concept and production. Although it might be a bit too avant-garde for commercial success, it is nonetheless a brave undertaking. Best cuts: "Rosie," "5 O'Clock In The Morning," "When Things Go Wrong" Dealers: This three-record boxed set is priced at $22 and perhaps a bit too steep to experiment with.
Posted by By Mark Betcher at 9:02 AM