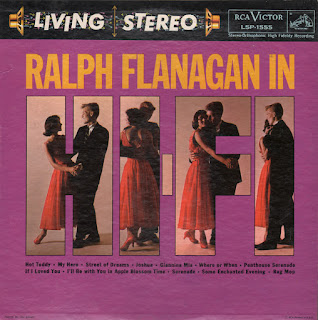 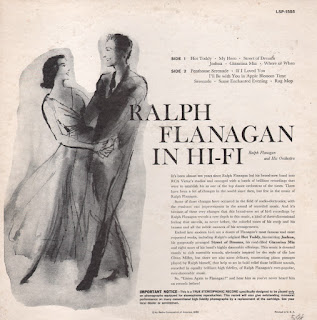 From Billboard - May 31, 1958: Good collection of tunes all styled in a very danceable manner. This could find favor with those looking for dance sets.

From the back cover: It's been ten years since Ralph Flanagan led his brand-new band into RCA Victor's studios and emerged with a batch of brilliant recordings that were to establish his as one of the top dance orchestras of the the times. There have been a lot of changes in the world since then, but few in the music of Ralph Flanagan.

Some of these changes have occurred in the field of audio-electronics, with the resultant vast improvements in the sound of recorded music. And it's because of these very changes that this brand-new set of hi-fi recordings by Ralph Flanagan reveals a new depth to this music, a kind of three-dimensional feeling that unveils, as never before, the colorful tones of his reeds and his brasses and all the subtle nuances of his arrangements.

If you read between the lines, the RCA notes seem to excuse the dated approach the producers took in their effort to create this set which they hoped might appeal to Flanagan fans. The younger late 50s space age buyer who was consuming more dynamic big band-type arrangements at that time would likely not have been impressed.

Hot Toddy
My Hero
Street Of Dreams
Joshua
Giannini Mia
Where Or When
Penthouse Serenade
If I Loved You
I'll Be With You In Apple Blossom Time Serenade
Some Enchanted Evening
Rag Mop
Posted by By Mark Betcher at 10:29 AM