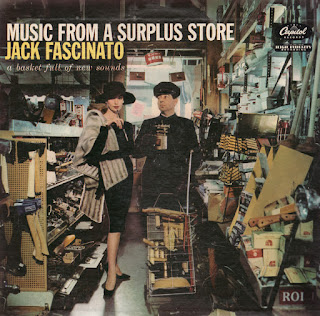 From the back cover: ...a collection of seemingly un-musical implements from the hardware shelf, such as trowels, putty knives, and crowbar, are blended with more usual orchestral sounds in twelve fun-filled original compositions by Jack Fascinato and Ken Snyder.

Each song bears a description of which tools were used in the composition such as the song titled Foggy Recollections... a somber number that uses an electric motor with variable speed control to make a sound pattern much akin to that of a diaphragm-type foghorn.

From Billboard - August 10, 1959: Stereo bugs will have a field day with this gem. Fascinate employs many colorful ork effects in presenting the interesting set. Tunes and tempos are nicely varied. Sound is excellent, and an amusing and displayable cover gives the LP sales plus values. Wide appeal.

A "gimmick" album? An experimental set or a conceptual effort? All of these elements are a part of this project, but Fascinate was able make one super creative set in which all of the experimentation becomes secondary to his fine arrangements which would appeal to any buyer of the time who was turned on to Mancini or other composers who were endeavoring to make "dynamic" mood music.

From jazz to lush strings... there is a sound for everyone.