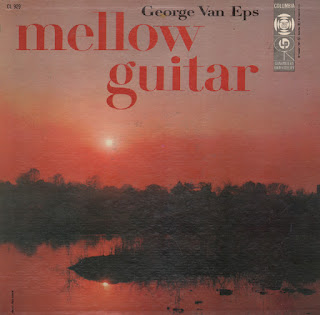 From the back cover: Apart from the nimble fingering that Van Eps provides, one of the most interesting facets of his presentation is his guitar itself, a seven-string guitar which he designed. He is the only performer among the major instrumentalists to use such an instrument and has added the extra string, enabling him to attain the remarkable effects that are particularly noticeable in Let's Do It, 'S Wonderful and Tango El Bongo. The concept of the guitar as a complete instrument, harmonically speaking, one capable of producing lead, harmony and bass line, is basic in the soloist's approach, and produce a richer result the is customarily the case.

George Van Eps began his instrumental career on the banjo, when he was twelve; two years later he switched to the guitar and has been enlarging his versatility ever since. Among the orchestra he has played with are those of Freddy Martin, Benny Goodman and Ray Noble; as a free-lance musician in radio and on records he has played for Jo Stafford, Dick Haymes, Peggy Lee, Frank Sinatra, George Cates and of course Paul Weston.

Along with the incomparable standard ballads he offers in this program are a pari of originals, Van Eps' now Tango El Bongo composed especially for the seven-string guitar, and Lost Canyon, written by his daughter Kay. The bongo is played by Alvin Stoller and the vibraphone by Frank Flynn. Whether musing over one of the tender melodies in the collection or giving a fleet-fingered exhibition of virtuosity, George Van Epps has worked out some splendidly intricate jazz arrangements for his instrument, delightful presentations of guitar music in an unusual view. With the added tonal spectrum of high-fidelity recording, the presence of the guitar becomes almost tangible: vibrant provocative and mellow.

From Billboard - February 16, 1957: Van Eps, playing a special seven-string guitar, of his own design makes some wonderfully satisfying sounds in a easy-going, neo-jazz vein. This is the same Van Eps who was heard in the Paul Weston "Solo Mood" album, here taking his first outing as the billed attraction. Most of the tunes are moody and melodic with the spotlight on imaginative but gimmicked stylings. The liquid, refreshing backing is a strong extra value. A nice production that can come in for jockey exposure and thence good retail action as well.

I'll Remember April
What Is This Called Love
Let's Do It
Yesterdays
They Can't Take That Away From Me
Have You Met Miss Jones
Tango El Bongo
Dancing On The Ceiling
Lost Canyon
The Boy Next Door
I Never Know
Posted by By Mark Betcher at 3:28 PM