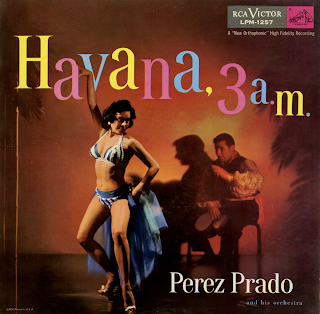 Terrific mid-50s Latin set that features a variety of inventive arrangements that plays through nearly as though Prado was producing a concept album.

From the back cover: It is interesting to observe that Prado's versions, of his own works as well as those of the other composers represented here, while they are so modern, so much a part of our complicated and fleeting time, are far from being over arranged as one might expect, but instead are rather simple. Perez Prado converts his feelings through the plainest mediums; and whether it is a vocal excerpt or an instrumental piece, he manages to give us the true, direct, engaging and nostalgic impression of a night in Havana...

From an article found in Billboard - February 23, 1957: Rack Field Gets Censorship Itch - Too Snappy Cover Art & Spicy Lyrics Nixed by Chains on Housewives' Beefs - Censorship is rearing its troublesome head in the record field here, particularly along the grocery chain circuit, which caters to the family trade.

"Daring" LP cover art is the primary target for the housewives' complaints, while so-called suggestive lyrics in show-tune packages also draw their share of beefs. The A&P chain here (New York), for instance withdrew RCA Victor's "Havana 3 A.M." by Perez Prado, which features an exotic rhumba dancer on the cover...

However, Martin (Joe Martin, record buyer for N. W. Moody which services A&P, Valley Fair and King Kullen grocery chains among others) stressed that censorship for the racks by no means implies a cover or tune is "dirty," but merely that it is too sophisticated or "too naked" for the chains' somewhat ultra-conservative tastes...