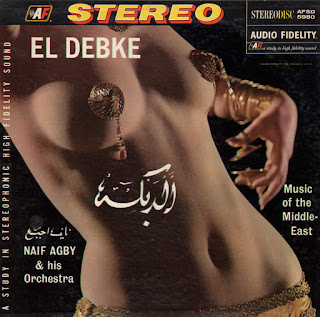 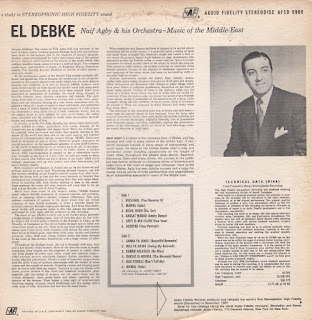 From the back cover: Naif Agby is a native of the Lebanese town of Ahden, and has traveled and lived in every corner of the Middle East. A seasoned musician trained in every phase of instrumental and vocal music, he came to the United States after a long and successful career including appearances on the stages of major cities throughout the Middle East – Beirut, Bagdad, Damascus, Cairo and many others. His success in the public eye was further achieved in numerous series of theatrical and radio tours in the roles of singer and composer. Here in the United States, Agby has won notable success and a large following among scores of Arab communities and organizations as an outstanding specialist in music of the Middle East.

From Billboard - December 15, 1962: Music of the Middle East, recorded in high fidelity stereo and played with excitement by the Nalf Agby Ork, makes this an outstanding album of its genre. Abby, a native of Lebanese composed most of the music, along with Sid Frey, head of the A-F label. The rhythmic music is even more intriguing in stereo, and the cover should grab attention.