Around That Time - Billy Daniels 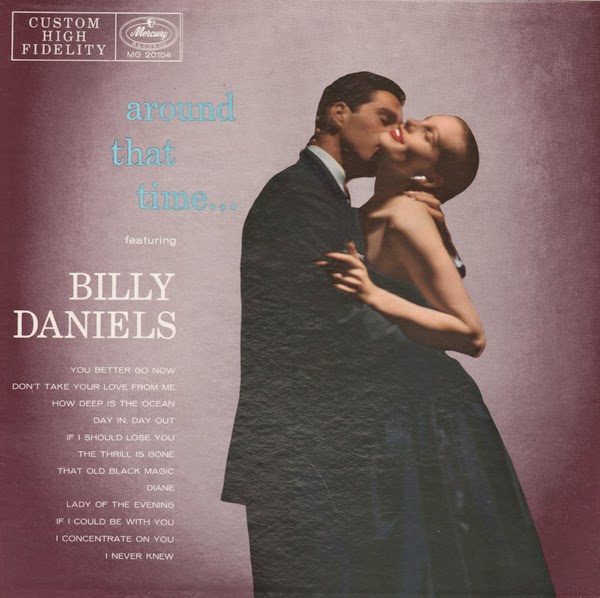 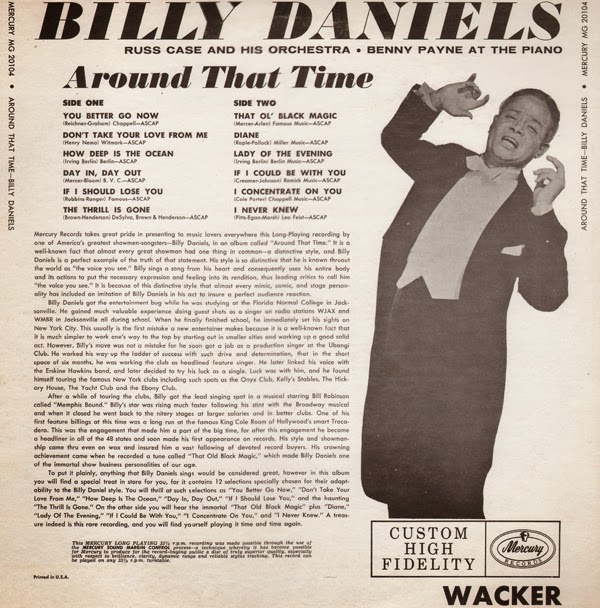 From Billboard July 21, 1956: Fine recap of a dozen of the warbler's have standards, all selected as a canny showcase of his style. Daniels as usual, comes over as almost visible on wax.

From the back cover: Bill Daniels got the entertainment bug while he was studying at the Florida Normal College in Jacksonville. He gained much valuable experience doing guest shots as a singer on radio station WJAX and WMBR in Jacksonville all during school. When he finally finished school, he immediately set his sights on New York City. This usually is the first mistake a new entertainer makes because it is a well-known fact that it is much simpler to work one's way to the top by starting out in smaller cities and working up a good solid act. However, Billy's move was not a mistake for he soon got a job as a production singer at the Ubangi Club. He worked his way up the ladder of success with such drive and determination, that in the short space of six months, he was working the club as headlined featured singer. He later linked his voice with the Erskine Hawkins band and later decided to try his luck as a single. Luck was with him, and he found himself touring the famous New York clubs including such spots as the Onyx Club, Kelly's Stables, The Hickory House, TheYacht Club and The Ebony Club.

You Better Go Now
Don't Take Your Love From Me
How Deep Is The Ocean
Day In, Day Out
If I Should Lose You
The Thrill Is Gone
That Ol' Black Magic
Diane
Lady Of The Evening
If I Could Be With You
I Concentrate On You
I Never Knew
Posted by By Mark Betcher at 11:03 AM