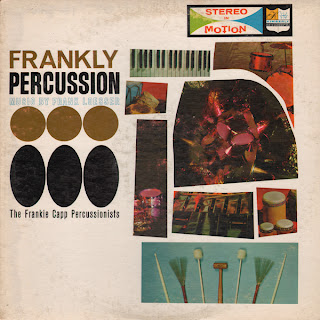 If I Were A Bell
Frankly Percussion
Music By Frank Loesser
The Frankie Capp Percussionists
Album Production: Dave Pell
Kimberly 11001

The sound is after early 60s "Command" label big band/ping pong LPs. No chances were taken on the arrangements, but the session is strong and the engineering quality is high.

From the back cover: On quality alone Frank Loesser could compete for the title of America's Number One Songwriter. Over 1500 songs with words and/or music by Loesser have been sung, played, whistled and danced to by a grateful nation. About fifty of them have been Hit Parade hits. Over a hundred motion pictures scores have included his songs. And he has four big Broadway shows to his credit.

Also from the back cover: Frankie Capp is not a newcomer to the percussion world. He is one of the top men in the jazz field today benign featured as the third man in the Andre Previn trio and as featured soloist with the Dave Pell octet. He has also been with such aggregations as Neal Hefti, Billy May, Harry James, Shorty Rodgers and Stan Getz. He has at various times worked with Peggy Lee, Ella Fitzgerald and David Rose. At present he is one of the busiest studio musicians in Hollywood and we are very happy to present him on his first album as a bandleader in his own right.

If I Were A Bell
Baby It's Cold Outside
Sit Down You're Rocking The Boat
Standing On The Corner
A Bushel And A Peck
Fugue For Tin Horns
The New Ashmolean Marching Society And Students Conservatory Band
My Darling, My Darling
The Moon Of Manakoora
Luck Be A Lady Tonight
I've Never Been In Love Before
On A Slow Boat To China
Posted by By Mark Betcher at 8:07 PM