King Of Organ With A Beat - Don Johnson 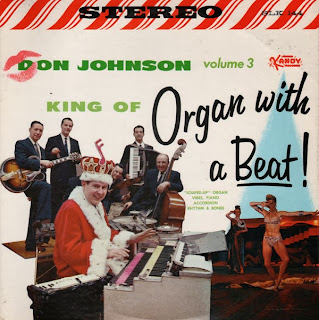 From the back cover: At age 6, Don tinkered with a make-shift drum set along-side the radio. At age 8, he envied a childhood playmate who could play "Nola" on the piano so he studied until he too, could play as well. Observing a vaudeville drummer winning more applause than a whole orchestra or any of the acts from his clowning, artistry and sound gimmicks, Don influenced his 12th year birthday present: a brand new set of drums complete with whistles and gadgets galore. His drumming talent won him a place in the senior high school band years ahead of schedule, his own dance bands and prizes from talent contests. Intending music to remain a hobby, Don studied classical piano, played percussion in high school orchestra and, later French and Baritone horns in the band. His piano playing put him through three years of college training in Engineering until called to military duty, World War II.

With papers in hand for re-entering University of Michigan's school of Engineering after four years in the military, Don waited for a plane to fly him from Seattle, Washington to his home town, Muskegon, Michigan. The plane was three hours late and Don whiled away the time on an electric organ at the airport dining room. The reactions from those who heard him that day, the post-war demand for this "new" electric organ in booming night clubs, plus his passion for music – all suddenly influenced Don, age 24, to become a full-time traveling organist. A well-rounded musical background, two solid years of concentrated organ study and ten successful years of night club performances – all helped to qualify Don Johnson's genius in producing these tremendous albums...

Sweet Georgia Brown
Tea For Two
Moonglow And Theme From Picnic
Josephine
Jalousie
Bye Bye Blues
Five Foot Two Eyes Of Blue
Brazil The Breeze And I
Happy Organ
The Shiek Of Araby
Mighty Low
Posted by By Mark Betcher at 9:48 AM