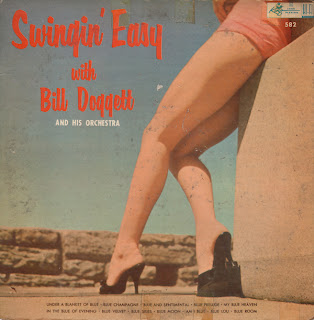 This is one of those albums  whose theme is built on a "color", in this case, "blue". However, for some reason... King did not carry through the title concept to the cover material.

More curiously, King tries to explain away the front cover... on the back cover: In these days of tricky titles, employed to attract attention and create curiosity so that the record shopper will select a particular album, we have simply titled this offering "Swinging Easy" which, we hope, expresses the exact meaning of the album.

This record has a smooth and intimate lounge sound and there is enough arrangement creativity to keep the tracks moving along nicely.

Under A Blanket Of Blue
Blue And Sentimental
Blue Champagne
Blue Prelude
In The Blue Of The Evening
Blue Velvet
Blue Skies
Blue Moon
Am I Blue
Blue Lou
Blue Room
By Blue Heaven
Posted by By Mark Betcher at 8:19 AM