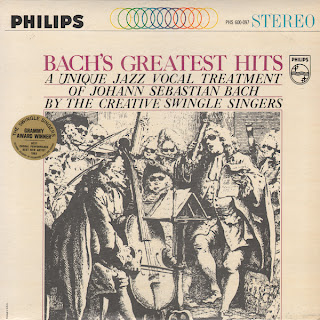 On the other hand, due to their oversight, I got to enjoy some very interesting sounds. The back cover notes go on to state that the compositions are original and only adjusted to add "bass and drums to set the fugues, preludes, and other compositions into 4/4 time". And "in two instances keys were changed to accommodate the limits of the human voice".

Basically, the producers wanted buyers to know that little was changed from the original and that Bach rocks!

Even though the vibe of each track doesn't subtaintially "vary"... in how the oohs, ahhs and dooby-dos are presented... The Swingles manage the pacing from track to track nicely which helps holds the interest held.