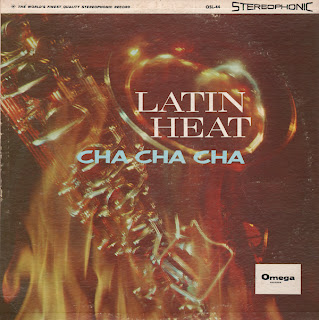 From the back cover: In Latin Heat the Francis Bay Orchestra has invested the greatest care in making a danceable, jazz-flavored, fresh, latin album. The brilliant piano of John Evans punctuates nearly every number. The crisp sax section is led by Benny Couroyer on tenor. The soaring trumpet belongs to Charlie Knegtel but the driving force that makes the Bay band function as a musical unit is Bay himself. He already has a large following of personal fans in Europe who know him affectionately as "Francis" and have come to appreciate his music for its most distinctive element... perfection.

For Omega, a budget label, this is a decent effort in space age cha cha.


Sweet Sue
Night And Day
I Found A Million Dollar Baby
On The Atchison, Topeka And Santa Fe
Will You Still Be Mine
On The Trail
Smoke Gets In Your Eyes
Around The World In Eighty Days
It Ain't Necessarily So
Chattanooga Choo Choo
All I Do Is Dream Of You
You Came A Long Way From St. Louis
Posted by By Mark Betcher at 10:07 PM