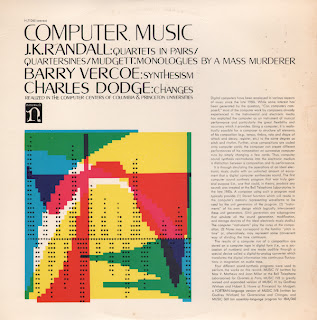 From the back cover: Four different sound-synthesis programs were used to perform the works on this record: MUSIC IV (written by Max V. Mathews and Joan Miller at the Bell Telephone Laboratories) for Quartets in Pairs; MUSIC IVB (a greatly revised and expanded version of MUSIC IV) by Godfrey Winham and Hurbert S. Howe at Princeton) for Mudgett; a Fortran-language version of MUSIC IVB (written Godfrey Winham) for Quartensines and Changes; and MUSIC 360 (an assembly-language program for IBM/360 computers written by Barry Vercoe) for Synthesism. All of the works used a digital-to-analog converter at the Bell Telephone Laboratories, and all were computed at the Princeton Computer Center with the exception of Changes, which made use of the Columbia Computer Center as well. The vocal parts for Medgett were recorded at the Hebert H. Hagens studio in Princeton.