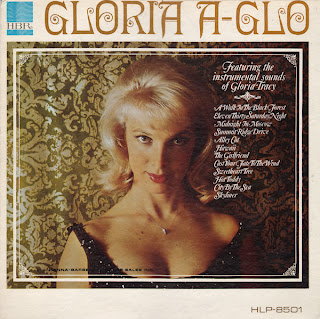 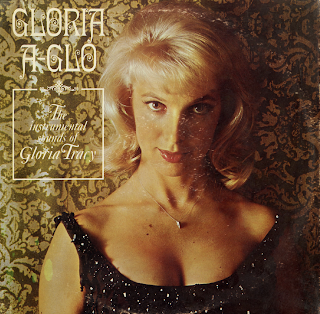 Midnight In Moscow
Gloria A-Glo
Featuring The Instrumental Sounds Of Gloria Tracy
Arranged by Jud De Naut
Produced by Larry Goldberg
Art Direction: H. C. Pennington
Photography: Studio Five
Typography: ACC-Headlines Of Los Angeles
Hanna-Barbera Records HLP-8501
1965
From the inside cover: "It sounds like the angels are having a jam session... That's what I thought the first time I heard Gloria Tracy's harp. I walked into the big room at the Tropicana Hotel in Las Vegas, heard this swinging music, looked up and saw this angel... and for a second wasn't sure if this was heaven or the hotel."
Gloria makes music easy to listen to. And Gloria is easy to look at too. After meeting her at the Tropicana, I introduced her to network television on my "Hollywood Talent Scouts" show, and she was such a smash success that we introduced her to the daytime audience on our network "House Party" radio and TV show and got bundles of letters from people across the country, all wanting to know about this 'new' sound. – Art Linkletter

From a 1964 Sarasota Herald-Tribune article: Unlike most harpists, Miss Tracy doesn't concentrate on classical music. She prefers jazz. "But it's not progressive jazz," she said. "It's music that people can understand. I'm trying to bring the harp down to where people can understand it." 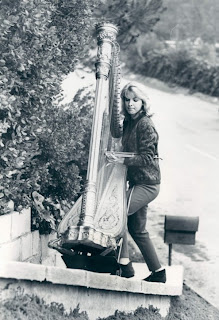 1965 press photo
A Walk In The Black Forest
Skyliner
Eleven Thirty Saturday Night
Midnight In Moscow
Summit Ridge Drive
Alley Cat
Hawaii
The Girlfriend
Cast Your Fate To The Wind
Sweetheart Tree
Hot Toddy
City By The Sea
Posted by By Mark Betcher at 7:29 AM