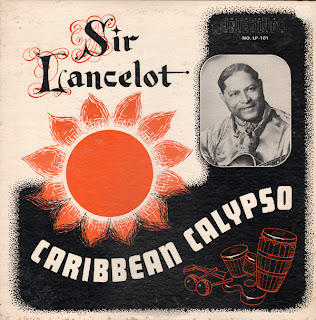 Some of his music is available online for purchase download, but not this album as far as I can tell.

Some history from the back cover which may be of interest:

His first engagement was at the Village Vanguard Nightclub in New York. It was a two weeks contract. The two weeks became a year. Hollywood called and Lancelot was signed by Columbia Films for a featured role in "Two Yanks in Trinidad," with Pat O'Brien and Janet Blair.

Other film roles followed, and between his world travels Lancelot has found time to do fifteen featured parts as well as numerous musical scores in calypso tempo for the major studios.

Lancelot also introduced singing in calypso commercials on radio and television, and has appeared on all the leading network television shows with such stars as Dinah Shore, Ray Anthony, Art Linkletter and Groucho Marx.

Lancelot has toured the world many times in concerts and nightclub engagements, playing in such glamorous spots as the Copacabana in Tokyo; The Atlantic Palace, Copenhagen; The Adlon, Helsinki; The L'Aiglon, Paris; The Casonova, Vienna; Jack's In Puerto Rico; The Kervansary Castle in Istanbul, Turkey; The Mid-Ocean Club, Bermuda; The Regina in Hamburg; and The Sands Hotel in Las Vagas.
Posted by By Mark Betcher at 10:27 AM